Funding for small interim improvements to Berhampore village was allocated as part of Councillor decisions in June on the Long-term Plan 2021-2031. Initial planning and design started in late 2022.

Got questions about this project? Email the team: newtownberhampore@wcc.govt.nz

Some of the things we could improve include: 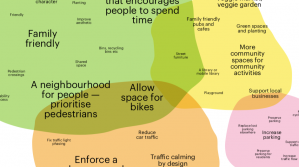 Or see the feedback from the individual drop in sessions.

Funding for small interim improvements has been set aside in the Long-term Plan 2021-2031. Initial planning and design started in late 2022.

A community working group was set up in 2019 to look more closely at the issues, challenges and potential solutions. Two public drop-in sessions were held and the working group met several times. The feedback we received from the public and the ideas from the working group will all be considered as part of the planning and design.

In the longer term, more substantial changes in Berhampore's shopping area are likely to happen as part of Let's Get Wellington Moving's future plans for mass rapid transport and a continuous safe cycling route from the city to the south coast.