We're making changes for people on foot and on bikes

Options for this section of road were put forward for community feedback in September 2017. 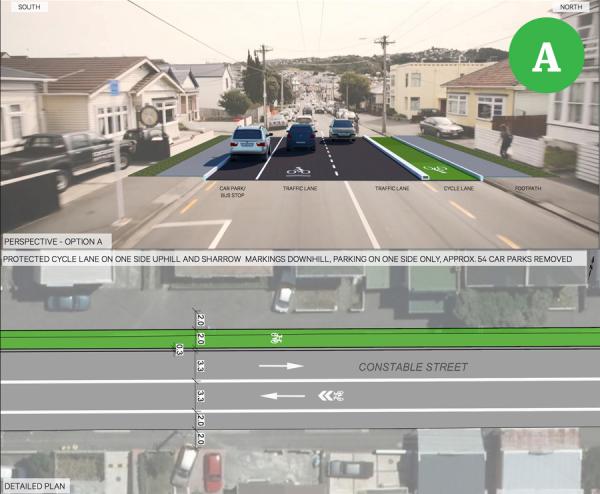 This option had more community support and provides a greater level of protection for people on bikes than Option B. The proposed design is appropriate for a busy through route such as Constable Street, which has a lot of traffic, including buses.

This section of Constable Street is likely to be developed in the future. For now the proposed link via Wilson Street will provide a connection between Kilbirnie and Newtown.

Option A: Kerbside bike lane uphill, downhill sharrow, parking removed one side only

The uphill kerbside bike lane improves safety for people on bikes and encourages less confident riders to use the route. The downhill sharrow markings increase driver awareness of people on bikes. This option has a higher cost than Option B, however the likely uptake by people on bikes is similar.

Option B: Sharrow markings on both lanes, parking retained both sides 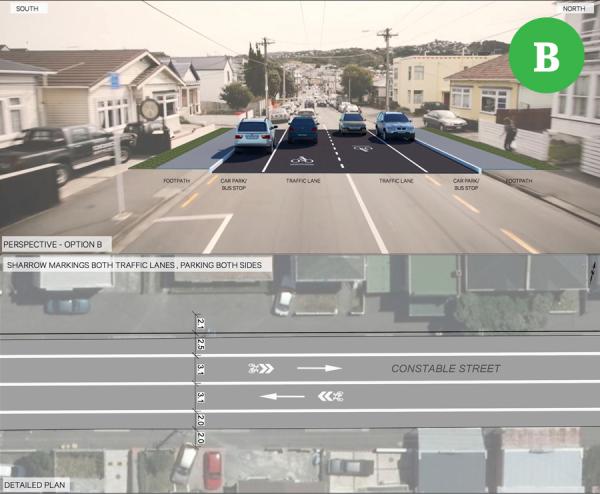 Or read the summary report of feedback (PDF 252KB)

Councillors approved plans for uphill bike lanes on Crawford Road and the top of Constable Street at a meeting on 8 March 2018 following community engagement in 2017. This route is the main Kilbirnie-Newtown connection, and will link to other new bike paths soon to be developed in Kilbirnie.

This section of Constable Street is likely to be developed in the future. For now the proposed link via Wilson Street will provide a connection between Kilbirnie and Newtown. Read the summary of feedback (PDF 252KB)

Kerbside uphill bike lane, sharrow road markings on the downhill traffic lane, parking removed on one side of the street. This option had more community support than Option A. Option B provides more space for all road users and a greater level of protection for people on bikes. The proposed design is appropriate for this part of Constable Street, which has a lot of fast-moving traffic, including buses. Parking can be accommodated nearby or elsewhere in the street. Read the summary of feedback (PDF 252KB)

Sharrow road markings on downhill traffic lane, kerbside uphill bike lane, parking removed from one side This was the only proposed option for Crawford Road. This route is an important connection for people biking between Kilbirnie and Newtown, and to the central city. The proposed design will give better protection for people on bikes. It is appropriate for a busy through route such as Crawford Road, which has a lot of fast-moving traffic, including buses. We will look at options for mitigating parking loss in the detailed designs. Read the summary of feedback (PDF 242KB)

The community was asked to feedback on some options. See the options that were consulted on for Crawford Road, Constable (Coromandel to Alexandra), and Constable Street (Riddiford to Coromandel).