The community gave feedback on the only proposed option for these sections of Miro Street and Kedah Street in September 2017. This route would connect the airport tunnel and Kauri Street or Hobart Street. 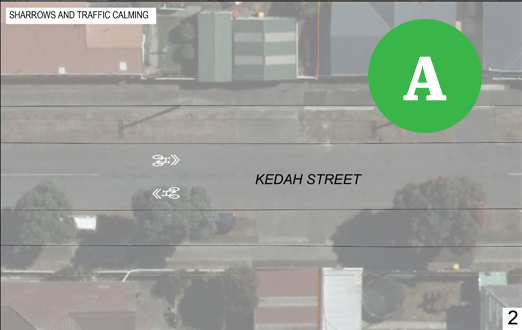 This was the only proposed option for these sections of Miro Street and Kedah Street. From the feedback received in September, this option had more community support than making no changes. The proposed sharrow road markings would be appropriate for these quiet streets with less traffic and low vehicle speeds.

We expect this project to be progressed as future funding allows.

Sharrow road markings increase driver awareness of people on bikes but are unlikely to encourage less-confident riders to use the route. Traffic speeds will need to reduce to improve safety for people on bikes. This option would encourage slower speeds, lowering crash risk and severity.

In 2016 – following community open days, discussions with local residents and online feedback – Councillors confirmed the routes and roads that would be used to develop better biking connections.