This project is part of our programme to develop a connected citywide cycle network so people of all ages and abilities can safely choose to make more trips by bike.

We’re looking at ways to make it easier and safer for more people to ride bikes in Berhampore, Newtown and Mt Cook. This involves taking a fresh look at how to improve neighbourhood connections and develop safer links to the city.

As well as the people who already cycle, we want families, children learning skills on school bike tracks, and anyone else who would like to be able to go by bike sometimes, to have routes where they feel comfortable riding.

This can only happen by making changes on some streets, so we hope you will continue to work with us to help develop the best possible plan for your wider neighbourhood.

Work is under way to develop a proposed package of bike routes and street changes in Berhampore, Newtown and Mt Cook. The package is likely to be a blend of the three options in response to what we have heard to date.

We’ve heard what you’ve told us in the earlier engagements, on the community objectives and the three package options; now we’re working through a list of other things that also need to be considered before we seek feedback from you in 2020 about a package of potential changes in the Newtown Connections area.

There’s a lot that needs to be considered to complete the puzzle. This will involve discussions about specific areas, including Berhampore village, and opportunities to look more closely at parking issues and coming up with better ways to manage parking. The diagram shows where we’re at, what still has to be done, and where we will be talking with groups or organisations about particular areas, or seeking wider public feedback. 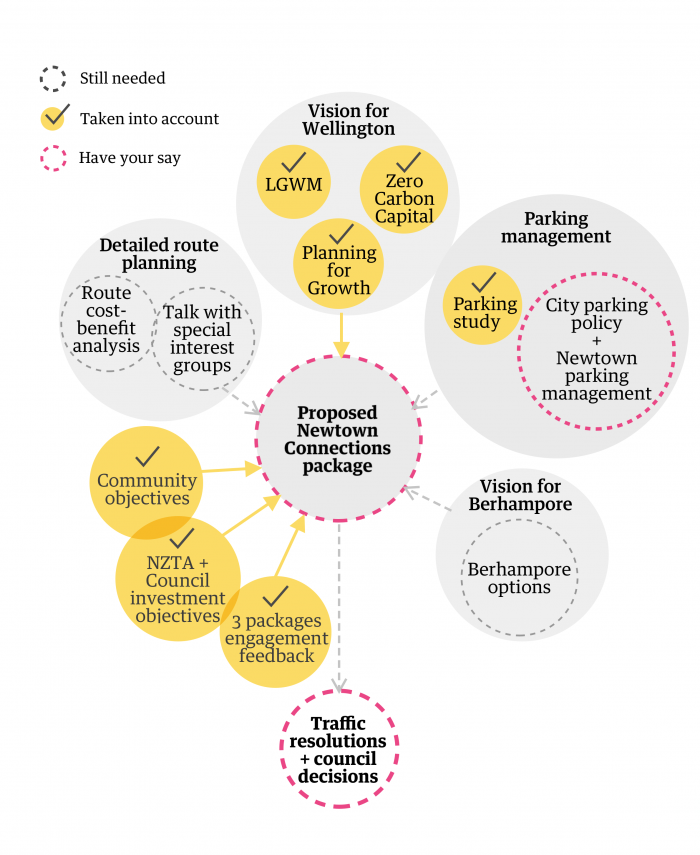 We’re working with the community to come up with a vision for how Berhampore village could be improved in the future. The plan will include a safe biking route through the area.

As part of this process, we’ll develop some concept design options for the community to provide feedback on. There is no funding set aside to make improvements at this stage however the project could be added to the Council’s Long-term Plan in future. Read more

There are several big city-wide projects that will influence the types of changes we make in the Newtown Connections area.

Parking is already under pressure from commuters and residents. This will get worse as our population grows.

Discussions with people, groups and organisations with a special interest in these suburbs or specific parts of the area will help us more clearly define the proposed routes and changes, and what order the work might happen in.

Keep up to date with how the project is going and understand the process so far. New events will be added as the project progresses.

View supporting documents for the project.

View the package options that we consulted the community on in November 2018.