Options for this section of road were put forward for community feedback in September 2017.

Option likely to be developed: One-way bike lane on each side of the road, between the kerb and parked cars, car-door buffer zone 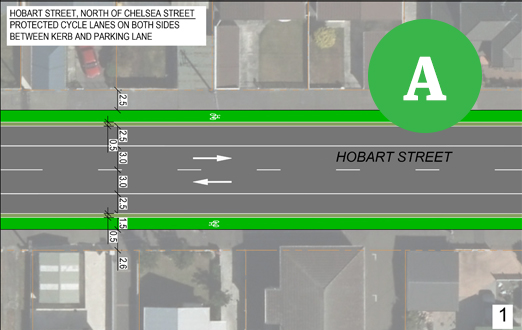 From the feedback received in September 2017, this option had slightly more community support than Option B. It would provide better protection for people on bikes and be a good connection between Miramar and Strathmore Park. The proposed design is appropriate for this busy through route.

A bike path at footpath-level may be possible in the long term but would involve high costs of laying new kerbs and moving stormwater drains and pipes. Instead we are likely to develop a design for a kerbside bike lane at road level that would include a raised buffer for people to park against, and to get in and out of cars.

We expect this project to be progressed as future funding allows.

The kerbside bike path would improve safety for people on bikes, and encourage less-confident riders to use the route.

Option B - One-way bike lanes between parking and traffic lane 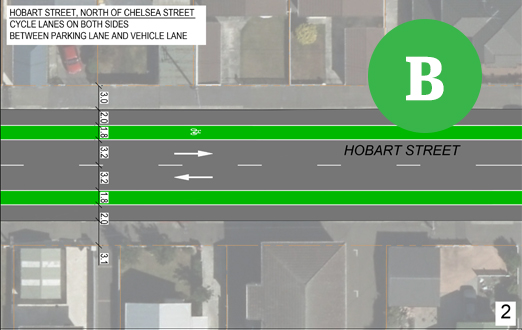 The new lanes would increase driver awareness of people on bikes, but would be unlikely to encourage less-confident riders to use the route. The pinch points created by the traffic islands would be removed.

In 2016 – following community open days, discussions with local residents and online feedback – Councillors confirmed the routes and roads that would be used to develop better biking connections.