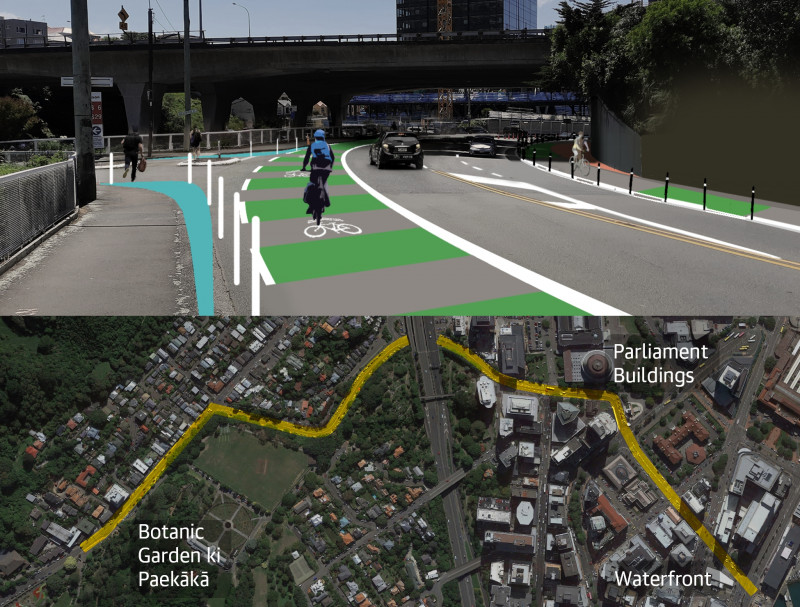 Wellington is growing, and more people will be living in apartments or townhouses – in suburban areas on main transport routes as well as the central city. To support this growth, we’re changing to a more sustainable transport system that will reduce harmful emissions and give new residents better options for how they can get around.

Our goal is to be a city where people of all ages and abilities can move easily and freely by bike or bus. These essential street changes will make it easier for more of us to be less reliant on our cars.

The route – the most important connections 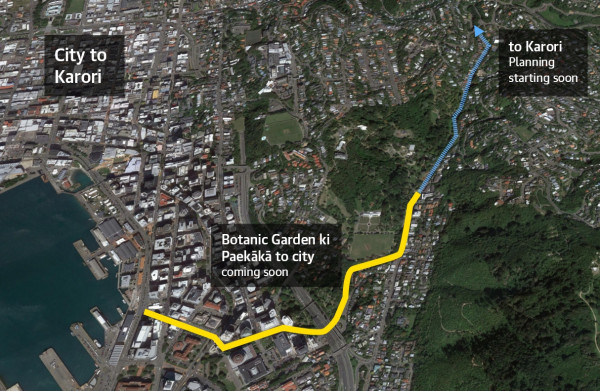 Paneke Pōneke is our plan for a citywide network of connected bike/scooter routes that will be combined with improvements for people walking and taking the bus.

The Botanic Garden ki Paekākā to city route will be part of the western connection from Karori, and make it safer for many more people to bike/scoot between Tinakori Road and the waterfront. A new bus lane will also mean quicker journeys for people taking the bus.

We're using adaptable materials so people can use the route, make suggestions, and help to refine the designs once they're installed. Making changes in this way will help to get the bike network in place as quickly as possible so more people can benefit.

Experience the changes, then tell us what you think

We worked with groups in the community and wider stakeholders to design the improvements along the route. We made changes in response to feedback from the community on the preliminary designs. For full plans, artist impressions, parking impacts and more, see the project details.

Councillors approved the traffic resolution to install the changes on Thursday 11 August 2022. Work to install the bus and bike lanes using adaptable materials will get underway from September. We expect the route to be completed by mid-January 2023.

Once all the changes are in, we’ll be working hard to gather feedback on how it’s going and improve things such as signs, street markings, and the position of dividers between the bike lanes and traffic.

The changes won’t be perfect or include much landscaping, but will enable more people to go by bike, e-scooter or bus sooner. These changes will be made permanent as part of Let’s Get Wellington Moving’s plans for the central city in the coming years.

Preparing for the future – more choice for more people

The changes along these streets will make things safer and easier for everyone using this busy route. Whether you walk, cycle or catch the bus, more people will have more choice for how they can get to and from work, school or tertiary study, dropping kids at daycare, shops, sports and recreation or visiting the Botanic Garden ki Paekākā.

Got questions about this project? Email the team: botanicgardentocity@wcc.govt.nz 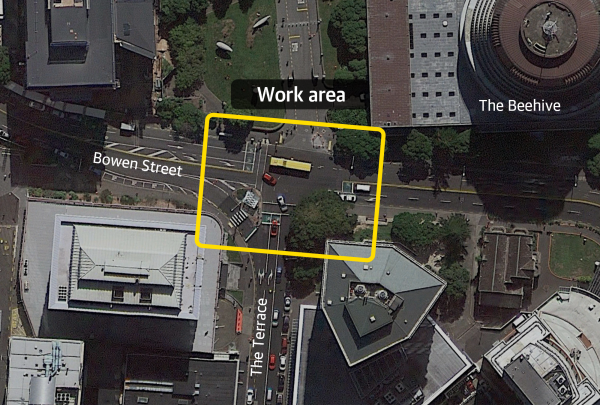 The intersection changes will make crossing here safer and easier, and are part of Let’s Get Wellington Moving’s programme of central city walking improvements. Work is scheduled to start in late August. ​

The big changes will be:

In advance of the bike and bus lanes, we're also installing underground ducts for the traffic signals, vehicle and bike detection loops that trigger the lights and bike-friendly stormwater drain grates.

We’re having to work around the construction happening at 46 Bowen Street (uphill from The Terrace). Once that project is finished, there will be a new bus stop and better connections for people on foot.

Then in July 2022, Wellingtonians had the opportunity to provide feedback on the traffic resolution for the changes for the Botanic Garden ki Paekākā to city route. Over 700 pieces of feedback informed the designs that went out for consultation, and Council analysed 638 pieces of feedback from individuals and 17 organisations about these designs, alongside advice from technical experts and the working group.

On Thursday 11 August, at a meeting or Pūroro Āmua, Councillors approved the route with one amendment – extending the peak-hour bus lane by an hour.

You can read a summary feedback report and all public submissions.

A recording of the meeting and minutes are also available on the Council website.

In this webinar (recorded on 15 March) you can meet the team and learn about important street changes that are part of the city's goal to be a net zero carbon capital by 2050. We talk you through two projects - Newtown to the city and the Botanic Garden ki Paekākā to the city. The Council's City Design Manager, Vida Christeller, and project lead Renee Corlett share information about the designs and when the changes will happen. The webinar includes a question and answer session, how you can provide feedback on the street changes once they're made and how to keep in contact with the project team.

In this webinar (recorded on 2 June) we talk you through the new bus stop platforms for the Newtown to the city and the Botanic Garden ki Paekākā to the city projects. The webinar includes a question and answer session with panellists from Wellington City Council, Waka Kotahi, Metlink, Zicla and International Design for All.

Once the changes are in, we’ll be monitoring and evaluating community feedback, local economic data, travel times for buses and traffic and use of short-term parking and loading zones.

Longer term, we’ll be tracking things like numbers of people riding bikes and taking the bus, diversity of people on bikes (age and gender), whether more people think the changes are positive, and kilometres of infrastructure installed per year and how long it takes to get things in.

Do you support the proposed changes to the Botanic Garden ki Paekākā to city route?

What is your main relationship to the area?