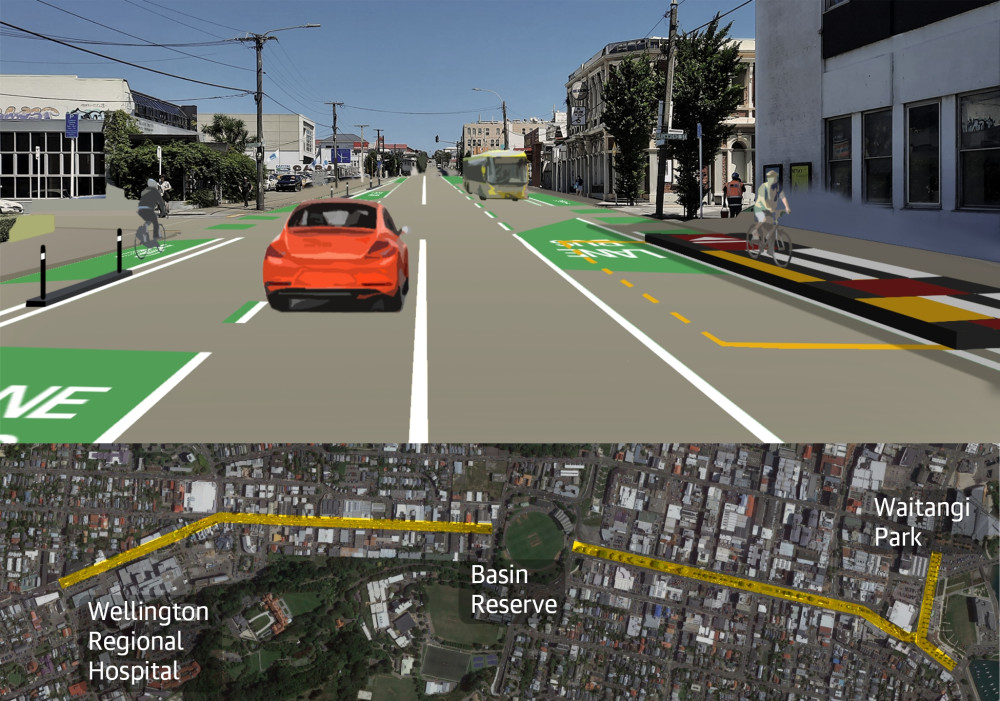 We're rebalancing our existing street space to make it safer and easier for more people to walk, ride, scooter, or use public transport. The Newtown to city route is part of the southern connection from Island Bay and will make it faster and easier for people using public transport and safer for many more people to bike/scoot between Newtown, Wellington Hospital and the waterfront (at Kent Terrace). The route has also been confirmed for mass rapid transit in the future.

Overall, the changes along these streets will make things safer and easier for people using this busy route and provide more options for how people can get to and from work, school, or tertiary study, drop kids at day care, visit local shops, Wellington Hospital and related health services, or sports and recreation.

Find out how the route is being installed and get the latest updates.

Learn more about the installation of Newtown to city and Botanic Garden ki Paekākā to city routes. Transitional Programme Manager Claire Pascoe, Project Lead Renee Corlett and Capital Delivery Manager Stephen Harte will share information about what's been done so far, highlight some of the new features and how they should be used, how we've responded to feedback and what to expect over the next few months.

The webinar will include a question-and-answer session, and more information on how you can provide feedback once the street changes on each route are complete.

See the changes, then tell us what you think

The first section of this route (along Riddiford Street between Mein St/Hall St and John St/Adelaide Road) was installed using an experiential approach.

We adapted our approach and took the proposed plans and community feedback through a traffic resolution consultation. Council approved the plans, and work is now underway to install the route with adaptable materials.

In the future, these changes will evolve as part of Let’s Get Wellington Moving as part of the confirmed route for mass rapid transit.

Got questions about this project? Email the team: newtowntocity@wcc.govt.nz

Following a Council decision in 2021 to accelerate the delivery of a bike network in Wellington, we planned to use a new experiential approach that would help deliver changes faster. We planned to install the route for 12 months using adaptable materials and give the community the opportunity to experience the changes in real time, so that we could make changes in response to their feedback and data we gathered.

Councils have two powers for making and enforcing street changes:

A small section of the route along Riddiford Street between Mein Street and John Street/Adelaide Road was installed using a Temporary Traffic Management Plan starting in May 2022. However, installation was temporarily stopped in June following a legal challenge.

Since then, the Council has reached an agreement with the group which had sought a judicial review. The agreement included a commitment to consult using the traditional traffic resolution process, which allows us to continue progress along the Newtown to city route.

Central government has acknowledged that the current legislation the Council sought to use is outdated and not fit-for-purpose in the current context, particularly how quickly we need to act in terms of reducing harmful carbon emissions from transport. They are reviewing this legislation as part of their Reshaping Streets programme.

What we're hearing: Newtown to city

people and organisations have had their say

Do you support the proposed changes to the Newtown to city route?

What is your main relationship to the area