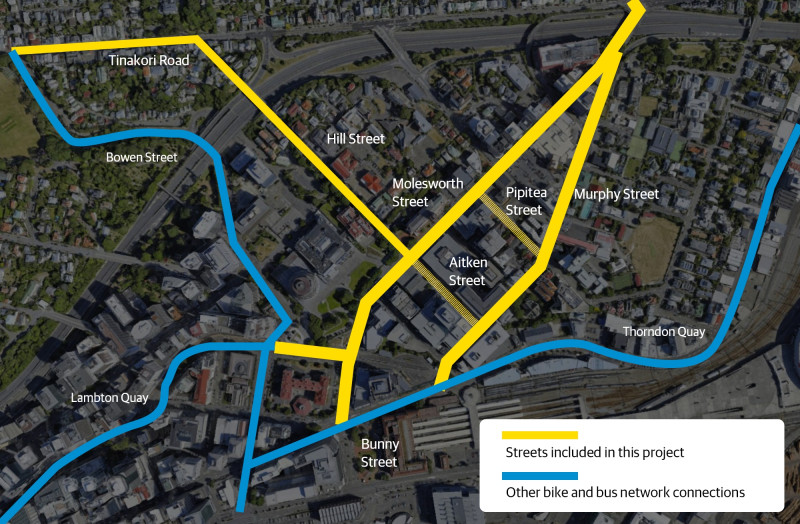 Wellington is expected to grow by up to 80,000 people over the next 30 years, which will dramatically affect the way our city look, feels, and operates. If we continue at our current rate of car use, our transport network will grind to a halt.

Our goal is to be a city where people of all ages and abilities can move easily and freely by foot, bike, scooter or public transport, so we're proposing to rebalance our existing street space to make these options safer and easier. These essential street changes will take time to get used to, but will make it easier for more of us to be less reliant on our cars.

Paneke Pōneke is our plan for a citywide bike network that will be delivered alongside improvements for people walking, scooting, and taking the bus.

The route - the most important connections

The Thorndon connections project will be part of connecting Thorndon and Wadestown to the city, making it safer for more people to bike/scoot or use public transport.

Thorndon is just a short distance from the central city, making it about a 5-minute bike ride into the city. There are a number of high schools and primary schools in this area, as well as Victoria University campuses, and many large employers along this route.

We are starting plans for several streets that have been confirmed as primary and secondary routes on the bike network in this area. These are important connections in our transport network, and were confirmed in Paneke Pōneke, Wellington’s bike network plan, in March 2022.

Overall, the changes along these streets will make things safer and easier for people using this busy route and provide more options for how people can get to and from work, school, or tertiary study, drop kids at day care, visit local shops or sports and recreation.

The designs will be developed by technical experts and will incorporate feedback from key stakeholders and businesses along the route.

In order to make sure we can get more of the planned bike route delivered quickly, we're looking to use adaptable materials so we can quickly install changes if the design is approved. The changes won’t be perfect or include much landscaping, but will encourage more people to go by bike, e-scooter, or bus. This means more people can start using the route sooner, and we can gather feedback and data to help refine the designs for more permanent changes in the next 5-10 years.

Making changes in this way will help connect our bike network across the city as quickly as possible so more people can benefit.

How to be involved

We’re working with technical experts and meeting with key stakeholders and businesses in this area to help inform the proposed changes.

As part of helping us understand the local context, we are keen to learn about how you and your whānau currently use and experience this area. Your feedback will help us to get the designs right and evaluate the changes. We’ll also be gathering data about numbers of people on bikes, scooters and buses, and monitoring the parking situation.

Once the designs are developed, we'll be seeking public feedback on the designs through consultation. This is likely to be before mid 2023.

Got questions about this project? Email the team: thorndonconnections@wcc.govt.nz