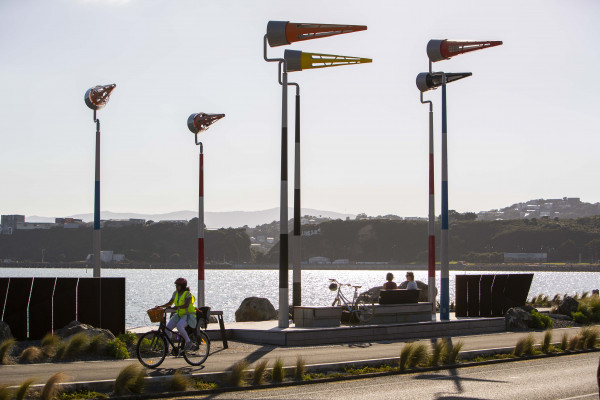 Let's Get Wellington Moving has asked for feedback on proposed safer speed limits on State Highway 1 and a new walking and cycling crossing on Cobham Drive. Consultation has closed and decisions will be made by City Councillors later in 2021.

A safe crossing would connect with the new footpaths on the seaward side of Cobham Drive, around Evans Bay, and new paths in and around Kilbirnie.

The Cobham Drive walking and biking paths were officially opened on Monday 15 March 2021, with a blessing by Taranaki Whānui ki te Upoko o te Ika. The ribbon was cut by Deputy Mayor Sarah Free and MP for Ōhāriu Greg O'Connor representing the Minister of Transport.

Contractors are making some finishing touches and, weather permitting, planting will be completed in July 2021.

The Urban Forest wind sculpture has been removed for maintenance.

The changes along the seaward side of Cobham Drive have transformed this coastal recreation area to be a safer walking and biking route and a more attractive gateway to Wellington from the east.

This is the main transport route to and from Wellington Airport and is often the first glimpse of the city and its harbour for visitors. It's also home to the Meridian Energy Wind Sculpture Walk.

The new two-way bike path and separate footpath will make things safer and more enjoyable for everyone, and help to encourage more sustainable ways to travel. Landscaping, planting, seats and bike parking provide places where people can enjoy the views.

As one of the city's busiest cycling commuter routes, and a popular visitor and recreational destination, the new paths form part of Tahitai and Te Aranui o Pōneke / the Great Harbour Way – our region’s goal to one day have a walking and cycling path all the way around Wellington Harbour to Sinclair Head on the south coast.

Coastal protection was a big part of this project and the work we've completed has strengthened the most vulnerable section of Cobham Drive from erosion and storm damage. It will make the area more resilient to sea-level rise and the extreme weather patterns we can expect with climate change.

The 430m of new rock revetment (a sloping bank of rock) has been engineered to spread the force of the sea and help to protect this coastline of reclaimed land, the new walking and biking paths, and the state highway. The nooks and crannies in the rock bank will also provide more secure and appealing places for kororā (little blue penguins) to nest and moult.

Te Awa-a-Taia (the beach and park area near Evans Bay Marina and the Zephyrometer wind sculpture).

One of the landscaped areas developed along Cobham Drive.

One of the landscaped areas developed along Cobham Drive.

One of the landscaped areas developed along Cobham Drive (near the airport runway).

The area near the Urban Forest sculpture.

The area near the Urban Forest sculpture.

The seaward side of Cobham Drive has been upgraded to be a more attractive coastal recreation area. It will also make things safer and more enjoyable for people walking and biking along here, and the new paths will provide a better connection between the eastern suburbs and central city.

Coastal protection work will help to strengthen the most vulnerable section of Cobham Drive from erosion and storm damage – and provide more places for penguins to nest.

The first section of the new paths on Miramar Avenue, between Miramar wharf and Calabar Road, was completed in December 2017.

New street lighting poles with LED lights and banners were installed along the Cobham Drive central median during 2018 and early 2019, and cables were moved underground. The old street lighting and trolley bus poles were removed as part of this work.

Construction work on the new paths and landscaping resumed in May 2019. The new paths, landscaping, planting, seats, viewing platforms, and improvements at the small beach area at Evans Bay Marina and Troy Street carpark were completed in March 2021. The remaining planting will be completed in autumn / winter 2021. Solar lights will also be installed.

View the construction details and how the work progressed.

With the first phase of the two-way coastal bike path on Evans Bay also under way, the Cobham Drive paths will help to connect the eastern suburbs with the central city. Once complete, it will be possible to ride the 7km journey between Miramar cutting and the city without having to ride on the road.

The Let's Get Wellington Moving programme plans to make it safer for people to cross Cobham Drive.

A safe crossing would connect with the new footpaths on the seaward side of Cobham Drive, around Evans Bay, and new paths in and around Kilbirnie.