Through the Let's Get Wellington Moving (LGWM) programme, big changes are proposed on Thorndon Quay and Hutt Road to improve this busy commuter route. Find out more about the proposals on the LGWM website.

The project follows earlier discussions with the community about Thorndon Quay over the past few years, and will build on and complement changes that have already been made along part of Hutt Road. Proposals include an interim plan to make the route safer by removing angle parking on Thorndon Quay.

The project is also looking to:

New walking and biking paths along Hutt Road were officially opened on 11 November 2019.

We turned the old shared path between Caltex Fuel Stop and the Thorndon Quay/Tinakori Road intersection into a two-way bike path and separate walking path. 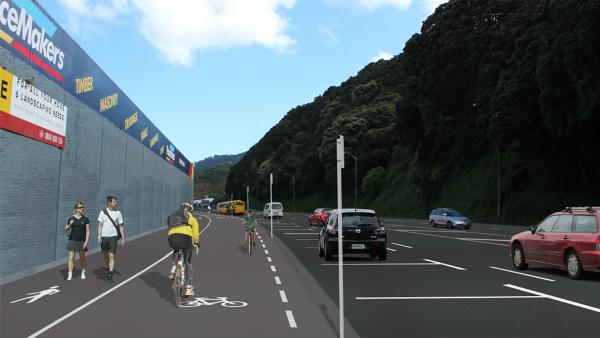 It's one of our busiest commuter routes and a crucial link in the region's wider cycle network. About 1200 trips a day are made by people on bikes and the number choosing to use the shared path has doubled in the past 10 years. On an average weekday, more than 10,000 people travel this route by bus.

In time, it will be part of Te Ara Tupua, the Wellington to Hutt Valley cycling and walking link to be built by Waka Kotahi NZ Transport Agency.

Work on the first phase of upgrading the shared path started in October 2016 when we began replacing the street lights on the western side of Hutt Road. Preliminary construction on the pathway got under way in April 2017 and continued until mid-2018 as far as the Tinakori Road intersection. Widening the bridge over Kaiwharawhara Stream took place from August to November 2019.

The project was developed in three sections:

The proposed Hutt Road cycleway opened for public consultation on 16 March 2016. We also held two open days for people to come along and find out more. 991 people provided feedback before consultation closed on 18 April 2016.

Councillors heard 45 oral submissions from the public at a Transport and Urban Development Committee meeting on 5 May 2016.

In 2016 the Council approved a phased approach to constructing the Hutt Road cycleway to allow more investigation into:

Parking surveys have found that 40% of people parking along Hutt Road are commuters who continue on into the city on foot, by bike or bus. We investigated alternative options for parking in the area to accommodate the 60% of people who park along Hutt Road near where they work.

Traffic lights at Spotlight were investigated but not recommended. The Council agreed to leave the intersection as it is. While there were some safety benefits for people accessing Spotlight, the loss of parking to make room for extra lanes and the overall delays to all road users would be significant. This, combined with the narrowing of the median at the intersection, would also result in increased risk to people on the path.

Hutt Road is one of our busiest commuter routes and a crucial link in the region's wider cycle network. More than 400 people cycle this way at peak times, and the number choosing to use the bike path has doubled in the past 10 years.

Hutt Road was selected as the most viable route to provide a northern connection in Wellington’s wider cycling network. Long-term, a coastal route could possibly be developed as part of Te Aranui o Pōneke / the Great Harbour Way.

To make a formal submission, you’ll fill in a form to share your views on all parts of a project.

Formal submissions can be made during the consultation period for a project. You can choose whether you would also like to make an oral submission to Council.

You can give quick feedback about how you feel about any part of a project outside of consultation periods through 'Your views'. Anyone visiting the website will be able to see your comments online, and your feedback will also be shared with Councillors.