Through the Let's Get Wellington Moving (LGWM) programme, big changes are proposed on Thorndon Quay and Hutt Road to improve this busy commuter route. Find out more on the LGWM website.

The project follows earlier discussions with the community over the past few years and will build on and complement changes that have already been made along part of Hutt Road. However a more targeted scheme to increase safety for cyclists and improve travel through the area for everyone by changing angle parking to parallel parking is happening as an interim measure.

Work is expected to start on Sunday 12 September 2021 and will be carried out over two weeks depending on the weather. We anticipate minimal disruption while the changes are being made. The change to the parking was consulted on as part of the Let’s Get Wellington Moving Thorndon Quay and Hutt Road project, and approved by the Council in June 2021.

The broader project for Thorndon Quay is also looking to:

Thorndon Quay is an important part of Wellington’s transport network, particularly for people in the northern suburbs. 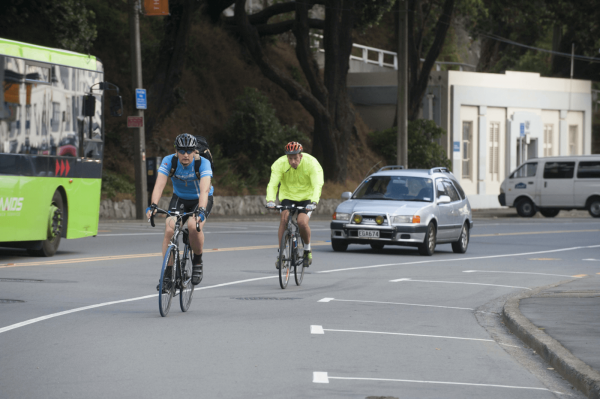 In 2017, a Thorndon Quay community working group was set up to look at options for improving bus priority and making the street safer for people on bikes and on foot. The project later became part of the Let's Get Wellington Moving programme.

Find out more about the Thorndon Quay and Hutt Road project.

Project considered but no longer going ahead

An interim improvement for bikes was approved by Councillors in 2018 that would have converted the angle parking to parallel parking and marked on-road bike lanes between Davis Street and Mulgrave Street to make this section of Thorndon Quay a little safer.

See the details of the interim solution considered

Keep up to date with how projects are going, and understand the process so far. New events will be added as the project progresses.

Where the route will go

See where the proposed route will go, and how it will improve safety for road users on Thorndon Quay.

The Thorndon Quay route will go from the Aotea Quay overbridge along Hutt Road, Thorndon Quay, Featherston Street, and Bunny Street to the Waterloo Quay intersection.

To make a formal submission, you’ll fill in a form to share your views on all parts of a project.

Formal submissions can be made during the consultation period for a project. You can choose whether you would also like to make an oral submission to Council.

You can give quick feedback about how you feel about any part of a project outside of consultation periods through 'Your views'. Anyone visiting the website will be able to see your comments online, and your feedback will also be shared with Councillors.