We considered making it possible for people to cycle both ways in this one-way section of Willeston Street, between Willis Street and Victoria Street.

Feedback from the public in mid-2017 showed 73 percent of submissions (56) in support of the proposal and 20 submissions against.

At this stage the proposal is not being progressed. Further discussion with the community on the merits of using this type of bike lane in certain locations is possible in the future. 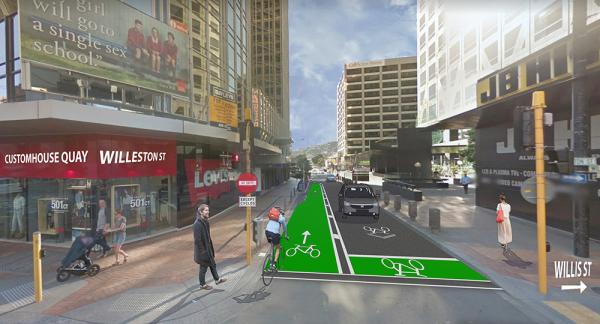 We want to make things safer and more convenient for people on bikes, and improving connections between streets is one of the ways we can do this.

Making this change would improve the connection between the Golden Mile and the waterfront.

This type of bike lane was proposed because the traffic volumes and speeds on Willeston Street are low. About 1400 vehicles a day travel this way and the average speed is 23 km/h.

This was one of a series of planned changes to improve connections and make it safer and easier for people to get places in the central city by bike.

There would be enough room for a bike lane within the existing road space.

Read the proposed traffic resolution report that went out for consultation.

More about contra-flow lanes and how they work